H.H. 17th Karmapa Trinley Thaye Dorje travels and teaches extensively around the world, and has visited Europe many times since his first tour in 2000. His full 2012 tour details are available at http://www.karmapa.org/news/tour_2012/index.htm.

The 2012 tour has been jointly organized by several branches of the Karma Kagyu sangha in Europe – Diamond Way Buddhism, the French Federation of Kagyu Centres, Bodhipath, and the Dechen Community.

H.H. 17th Karmapa Trinley Thaye Dorje makes extensive teaching tours of Europe as often as his busy schedule in Asia and other places permits. Everywhere he goes, he gives the traditional teachings of the Karma Kagyu, in a way that is accessible to all. Increasingly, young people everywhere are receptive to his message of the importance of lasting values, friendship and meaningful living.

In 1999/2000, H.H. 17th Karmapa Trinley Thaye Dorje conducted his first teaching tour in the West, drawing thousands of students curious to see the lineage holder for the first time in this incarnation. Among other events, he gave teachings and empowerments in Germany, which you can watch in the video to the right.

The Huffington Post, a well-read current events news site, invited H.H. 17th Karmapa to be a guest contributor. He was asked to give his perspective about important events in the world today.
For his first article, H.H. 17th Karmapa wrote about the financial crisis, how it affects the young generation, and about the concepts of inner and outer wealth in a post entitled The Wealth of Europe:

“The inner wealth is our mind, our consciousness. I believe that this mind is like a wish-fulfilling jewel. If you know how to utilise this mind, it can produce the most beneficial effects.”

As a followup article, H.H. 17th Karmapa gave some considerations for us to apply in order to question the very nature of poverty and crisis, in his article Five Steps to a Wealthier Life:

“I think that especially for us as “youth” it is important to constantly ask ourselves the question “How much is enough?”, both in relation to our material and non-material values.”

In connection with these series of articles, H.H. 17th Karmapa has set up a Facebook poll on the Wealth of Europe. 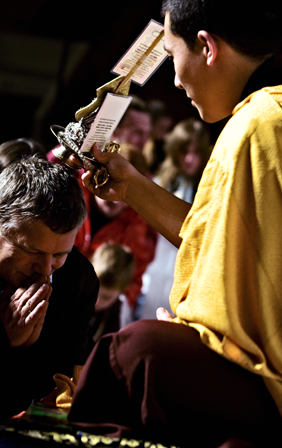 Videos of the activity of H.H. Karmapa

H.H. Karmapa gave an empowerment and teachings in Düsseldorf during his first Europe tour