In 2012 the Karma Kagyu centres of the UK are fortunate to be hosting H.H. Karmapa Trinley Thaye Dorje for an entire week. He will make a tour of the UK, spending time in the North in Harrogate and Manchester, and London in the South.

In Harrogate on the 9th, and in Manchester from the 10th to 12th July, he will give teachings and empowerments at meditation centres of the Dechen community. The teachings will focus on the development of compassion and wisdom as a path that anyone can take to personal development, culminating, for the committed practitioner, in full enlightenment. See the Dechen events website for more information on these events.

In London on the 14th and 15th July, he will give teachings and an empowerment, hosted by Diamond Way Buddhism UK. Thousands of his students and members of the public are expected to attend over the three days of the programme.

Despite a busy schedule of teaching in Asia and Europe, he has managed to come to the UK more than once; in fact July 2012 marks his fourth visit to the UK.

In 2009, he gave Buddhist teachings and empowerments as part of a tour of Buddhist meditation centres of the Diamond Way and Dechen Community in the UK. Read more about his UK visit in July 2009.

In 2007, he gave teachings on the Enlightened Attitude as well as the Bodhisattva Promise and the empowerment of White Tara in London. Read more about his visit to London, 2007.

On his first visit to London in his 17th incarnation, he gave a lecture in the very hall in which his predecessor, H.H. 16th Karmapa, Rangjung Rigpe Dorje, had conducted the Black Crown ceremony in 1974, which only the head of the Karma Kagyu lineage can perform. Read more about the historic first visit of H.H. 17th Karmapa Trinley Thaye Dorje in London, 2005. 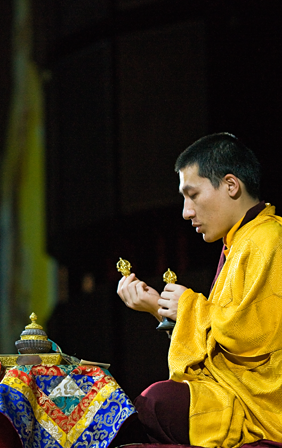